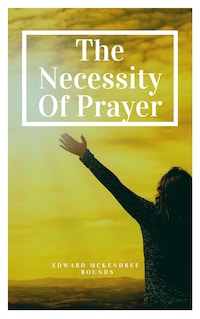 The Necessity of Prayer

106 pages
TypeE-book
SeriesMessage of Hope During Coronavirus Outbreak
Categories
Non-fictionPhilosophy & Religion
Share this book
EDWARD McKENDREE BOUNDS did not merely pray well that he might write well about prayer. He prayed because the needs of the world were upon him. He prayed, for long years, upon subjects which the easy-going Christian rarely gives a thought, and for objects which men of less thought and faith are always ready to call impossible.

From his solitary prayer-vigils, year by year, there arose teaching equaled by few men in modern Christian history. He wrote transcendently about prayer, because he was himself, transcendent in its practice.

As breathing is a physical reality to us so prayer was a reality for Bounds. He took the command, "Pray without ceasing" almost as literally as animate nature takes the law of the reflex nervous system, which controls our breathing.

Prayer-books  real text-books, not forms of prayer  were the fruit of this daily spiritual exercise. Not brief articles for the religious press came from his pen  though he had been experienced in that field for years  not pamphlets, but books were the product and result. He was hindered by poverty, obscurity, loss of prestige, yet his victory was not wholly reserved until his death.

In 1907, he gave to the world two small editions. One of these was widely circulated in Great Britain. The years following up to his death in 1913 were filled with constant labour and he went home to God leaving a collection of manuscripts. His letters carry the request that the present editor should publish these products of his gifted pen.

The preservation of the Bounds manuscripts to the present time has clearly been providential. The work of preparing them for the press has been a labour of love, consuming years of effort.

These books are unfailing wells for a lifetime of spiritual water-drawing. They are hidden treasures, wrought in the darkness of the dawn and the heat of the noon, on the anvil of experience, and beaten into wondrous form by the mighty stroke of the Divine. They are living voices whereby he, being dead, yet speaketh.  C.C.

The above Foreword was written by Claude Chilton, Jr., an ardent admirer of Dr. Bounds, and to whom we owe many obligations for suggestions in editing the Bounds Spiritual Life Books. We buried Claude L. Chilton February 18, 1929. What a meeting of these two great saints of God, of shining panoply and knightly grace!