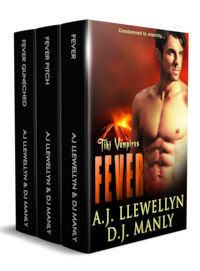 When Jepoi meets the man of his dreams, he has no way of knowing that Malakai is a fallen Hawaiian god condemned to eternity…as a vampire.

The pantheon of gods were displeased when Kane, one of their major gods, fell out with his lover Kanaloa, one of the ruling forces over the Hawaiian Islands. Condemned to an eternal earth-bound life as a shape-shifting vampire, Malakai has one chance to break the curse. He must never fall in love and he must never intervene in human problems.

All that goes astray when he meets Jepoi, a young male nurse working on the Big Island of Hawaii. Malakai falls for Jepoi and can't resist him, but then all hell literally breaks loose when Malakai saves Jepoi from ancient and deadly disease that returns to the fatal shores of Hawaii.

Malakai and Jepoi have infuriated the major Hawaiian god Kanaloa by falling in love. Malakai was once Kanaloa's lover, and after a nasty break-up, Kanaloa banished Malakai to eternity as a vampire on earth. Malakai loves Jepoi and yearns for a peaceful, mortal existence with his man, but Kanaloa is a sore loser. He's not about to lose the man he worships to a guy who just won't go away…so he abducts Jepoi and punishes him severely.

He turns Jepoi into a vampire, separating him from Malakai. Jepoi struggles to find his way as a Hawaiian vampire, learning what it's like for others of his kind in the islands.

When Malakai finds Jepoi, their passion reaches fever pitch. To punish them both, Kanaloa opens up all the gates of hell, unleashing long-dormant demons and monsters into the islands.

Can the pantheon of gods really control human emotions? Or can love really conquer all?

In the Tiki Vampires trilogy, everything we know about myth and magic explodes with the eruption of Kilauea Volcano on the Big Island of Hawaii. Though legend has it that the old gods departed the islands, they didn’t. Many have been condemned to lives as creatures of the night. Vampires, werewolves and other fabled creatures abound on the islands’ silky coastlines. For the fallen god Kane, life as the vampire Malakai was lonely and pointless before he met Jepoi, a young man who somehow pierces Malakai’s invisible armor.

Kaneloa, the Hawaiian god who condemned Malakai to his undead existence, punishes Malakai and Jepoi, trying to keep the two men apart. As the series unfolds, Malakai and Jepoi face seen and unseen foes. Old legends about the islands come back to life. Ancient crossroads like the City of Refuge spring back to existence as Jepoi and Malakai are forced to live apart, even though each wants the other. Will the gods or the humans win?