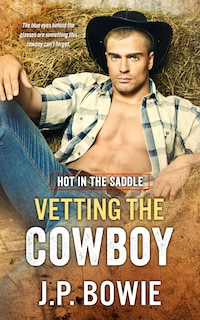 When Mike Henry, the new veterinarian in town, meets cowboy Seth Archer, it could be good times ahead—but Mike’s ex isn’t about to let him go without a fight.

Seth Archer, working cowboy on a dude ranch in Northern California, is thrown for a loop when he meets Mike Henry, the new veterinarian in town. The five-foot-eight bespectacled Mike isn’t Seth’s type, but the blue eyes behind the glasses are something Seth can’t seem to get past or forget.

Mike’s on the run. Well, not exactly, but he left Seattle to get away from Victor Torrens, a dominating boyfriend who turned abusive when Mike told him he wouldn’t be his submissive. Mike hasn’t worked with horses before, but it’s not long before his natural love of animals—and cowboys—makes him decide to call the small town of Denton home.

Seth and Mike bond, but their love affair might just be doomed before it truly begins when Victor sends Alex Brand, a celebrity bodyguard, to strongarm Mike back to Seattle.

In order to protect Seth and his new friends from Alex’s big fists, Mike may be forced to make a decision he’ll regret for the rest of his life.