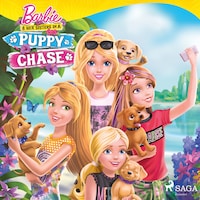 3.1
33m
67 pages
NarratorKristen King
TypeAudiobook, E-book
SeriesBarbie
Categories
ChildrenFrom 3+AdventureLove & Friendship
Share this book
Barbie and her sisters Skipper, Stacie and Chelsea are travelling to a tropical island for Chelsea to compete in a dance competition, and of course they have all brought their loyal puppies with them.
Upon their arrival Barbie has a special surprise for her sisters. At first, they are hesitant to join in the fun, afraid that they will miss the competition, but she convinces them there will be time.
Occupied by the entertaining surprise the sisters fail to notice that the puppies have left their side and are now nowhere to be found! Of course, the sisters must chase them down, but will they find the puppies and make it back in time for Chelsea’s competition? Come on an amazing adventure with Barbie and all her friends! Solve mysteries with secret doors, sea monsters and messages in a bottle, catch the baddies as a secret agent, sing in Barbie’s rock band, celebrate Chelsea’s birthday in Dreamtopia and fly to tropical beaches and distant planets in far-away galaxies. Let’s go! Mattel’s Barbie doll is a fashion icon, world adventurer and every child’s best friend. Since the 1950’s she remains a popular toy in homes worldwide and the star of countless tv shows, movies, and books. The popular Netflix series Barbie Dreamhouse Adventures follows Barbie, her sisters and her boyfriend Ken, as they hang out in LA and travel the world in the Barbie camper van. For younger fans, Barbie’s little sister, Chelsea, takes centre stage in Barbie Dreamtopia as the sisters meet mermaids and fairies in a magical dreamland. In recent years, Barbie has taken YouTube by storm as a popular vlogger. She talks fashion, family, her life in Malibu but also sensitively tackles tough issues like racism, mental health and body image. Barbie’s new mission is to inspire girls to dream big. A recent line of empowering role model dolls includes Indian Paralympian, Manasi Joshi, and American soccer player, Alex Morgan. While Inspiring Women celebrates heroines such as Maya Angelou, Florence Nightingale and astronaut, Sally Ride. Barbie and associated trademarks are owned by Mattel and used under license from Mattel Europa. © 2021 Mattel