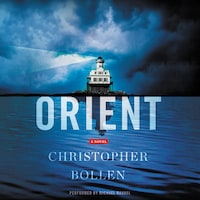 A gripping novel of culture clash and murder: as summer draws to a close, a small Long Island town is gripped by a series of mysterious deaths—and one young man, a loner taken in by a local, tries to piece together the crimes before his own time runs out.

Orient is an isolated town on the north fork of Long Island, its future as a historic village newly threatened by the arrival of wealthy transplants from Manhattan—many of them artists. One late summer morning, the body of a local caretaker is found in the open water; the same day, a monstrous animal corpse is found on the beach, presumed a casualty from a nearby research lab. With rumors flying, eyes turn to Mills Chevern—a tumbleweed orphan newly arrived in town from the west with no ties and a hazy history. As the deaths continue and fear in town escalates, Mills is enlisted by Beth, an Orient native in retreat from Manhattan, to help her uncover the truth. With the clock ticking, Mills and Beth struggle to find answers, faced with a killer they may not be able to outsmart.

Rich with character and incident, yet deeply suspenseful, Orient marks the emergence of a novelist of enormous talent.