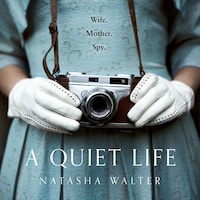 A double life is no life at all.

Since the disappearance of her husband in 1951, Laura Leverett has been living in limbo with her daughter in Geneva. All others see is her conventional, charming exterior; nobody guesses the secret she is carrying.

Her double life began years ago, when she stepped on to the boat which carried her across the Atlantic in 1939. Eager to learn, and eager to love, she found herself suddenly inspired by a young Communist woman she met on the boat. In London she begins to move between two different worlds – from the urbane society of her cousins and their upper class friends, to the anger of those who want to forge a new society. One night at a party she meets a man who seems to her to combine both worlds, but who is hiding a secret bigger than she could ever imagine.

Impelled by desire, she finds herself caught up in his hidden life. Love grows, but so do fear and danger. This is the warm-blooded story of the Cold War. The story of a wife whose part will take her from London in the Blitz, to Washington at the height of McCarthyism, to the possible haven of the English countryside. Gradually she learns what is at stake for herself, her husband, and her daughter; gradually she realises the dark consequences of her youthful idealism.

Sweeping and exhilarating, alive with passion and betrayal, A Quiet Life is the first novel from a brilliant new voice in British fiction.