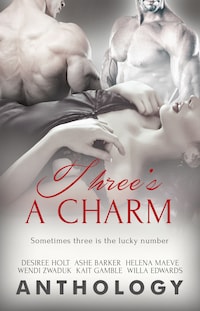 One foolish mistake has cost her dearly—it will take a brave decision to put her back in pole position.

For the avoidance of doubt, please be informed that you are a pair of arrogant, self-serving sh*ts. Further, you are bigoted, self-righteous phonies.

Not exactly the best way to address the directors of the law firm if I want to hang on to my job, but I’ve had it up to here with James and Daniel Morgan. If they object so strongly to what I do in my spare time they shouldn’t snoop into my Facebook account. Not that any of this self-righteous indignation is going to help me. I’ve been fired.

So what are they thinking now? First James and Daniel have me dismissed, then they turn up as though nothing is wrong while I’m clearing out my desk and invite me out to lunch? What are they up to? And why am I even going with them?

They may be handsome as sin, the pair of them, and now that they know I’m a pole dancer in my spare time they seem to think I’ll sleep with them to keep my job.

Not that the idea doesn’t have its appeal, but they’re wrong. I have my standards too…and not the double standards these two seem to live by.

If I decide to give James and Daniel Morgan a very private performance it will be on my terms, not theirs.

Dyer’s whole life is nothing but a game of play pretend. When he attempts to drag Derrick into his Three can be a fashionable number.

Waking up in bed with two men is not how model-turned-agent Jiya planned on mending her broken heart. One wild party and a pair of handsome strangers, and her previously entrenched principles seem thrown off-kilter. To make matters worse, one half of her extremely ill-considered one-night stand turns out to be none other than the very photographer she signed up months ago—with her ex-boyfriend’s help.

Stefon is both attractive and extremely good at what he does, an irresistible combination. Dating him should be enough—is enough—but Jiya’s quest to recover her missing phone soon has her revisiting both the scene of the party where they first met and its enigmatic but solitary host, Elijah.

Torn between two men, Jiya soon finds herself hurtling toward an impossible choice and a revelation that could change everything.

‘A Sinful Tune’ by Wendi Zwaduk

Two hot rockers and one girl…what could go wrong?

Robbie thought when he formed his band he’d get the girls, the gigs and the money. He’s got the gigs, but the money is a little slower in coming. He’s also got more than a few secrets. He wants the band to succeed, but even more, he wants to find the one woman who can accept him—warts and all, but also with his best friend Dillon involved.

Dillon loves Robbie like a brother. Robbie’s his other half in the music world. He handles the words while Robbie writes the music for the band. But all the music in the world isn’t enough if they don’t have their perfect third—Jess. She hits all the right notes for him and Robbie. The only issue? She may not accept their love in return.

Jess has followed the band for years and worked her way up to selling their merchandise. She knows their music almost as well as they do, but doubts they’d want to be with her. She’s so unlike the other women they’ve had—she’s short, curvy and a purple-haired Goth. When Robbie and Dillon hang out with her after one of the gigs, she has a choice to make. Either head home and wonder or let go of her fears and give the two men of her dreams the chance to make her fantasies come to life.

How is she to choose?

Zara King’s life is in shambles and filled with questions.

How had she ended up married to a man who didn’t love her and couldn’t keep his philandering ways under wraps?

How was she to move onto the next phase of her life without revealing a couple of secrets of her own? Namely her lovers, Tobias and Garrett.

How was she supposed to decide on one when she wanted them both in her life?

What would happen if they found out her desire?

Zara’s about to get some answers.

‘Ménage on the Rocks’ by Willa Edwards

Take two stubborn people, add another determined to make them all happy, mix in a creative use of chocolate and you get one hot Ménage on the Rocks.

As manager of the Rockshore Tavern and Grill, Stella Matthews has to deal with a lot of difficult personalities. But none are more difficult than the Rockshore’s demanding chef Ozzy DeMeer. Luckily, she has her boyfriend Raj Anand—the Rockshore’s most popular bartender—to keep her sane.

But when Raj suggests that maybe the reason she and Ozzy are so combative is because they are attracted to each other, she doesn’t know what to say, but no, no, no. NO! Not easily convinced, Raj approaches Ozzy with a special proposal and together they hatch a plan to give Stella what she really wants—a hot man sandwich—even if she doesn’t know it yet.

The chemistry between the three of them is explosive. But when fireworks in the bedroom turn into even bigger fireworks at the Rockshore, Stella walks away, unwilling to risk her reputation and position for a little bit of fun. Can two determined men convince her that love is worth the risk? Or is their blissful ménage determined to hit the rocks before they’ve even started?