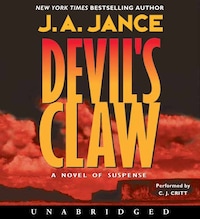 In the night-still canyons of the Arizona desert, a girl is on the run. Alone but for her beloved red-tailed hawk, she flees from the dark shadows of her young life, the horror she has witnessed…and the terror that now stalks her.

New York Times bestselling author J.A. Jance returns with her eighth novel in the highly acclaimed Joanna Brady mystery series. Set against the backdrop of the modern west, this gripping tale finds Sheriff Brady juggling a precarious overload in both her personal and professional lives. About to be married, Joanna's facing a daughter turning twelve and going on twenty, a meddlesome mother micro-managing her wedding, and new in-laws arriving any day. The sudden death of her much-loved neighbor and handyman, Clayton Rhodes, creates further turmoil, leaving Joanna shocked, saddened, and the target of Clayton's irate and irrational daughter, who accuses the Sheriff's Department of covering up a possible murder.

But amidst the uproar, the report of a homicide at Cochise Stronghold in the Dragoon Mountains quickly captures Joanna's full attention. An Indian woman has been found shot to death--a woman recently released from prision after serving time for the manslaughter killing of her husband. She is the mother of a missing fifteen-year-old, Lucy Ridder.

The death at first appears to be a case of domestic rage finally exploding'and a troubled teen runaway may be a victim, or a cold-blooded killer. Yet as Joanna deals with the long-standing troubles of Clayton Rhodes' family and digs deeper into the mysterious life of Lucy and her family, she discovers that investigating family hostilities is leading her down a twisted trail of hatred, greed, and far-reaching consequences--and into a dangerous world where violence is the first response and long buried secrets are a reason to kill…or die.

Once again, J.A. Jance delivers a gritty, deftly written thriller that unfolds on a vivid landscape of raw beauty and unrelenting danger. And, as always, Sheriff Joanna Brady brings the setting to life with the sensitivity, spirit, and intense passion for justice that makes Jance novels ring with authenticity.