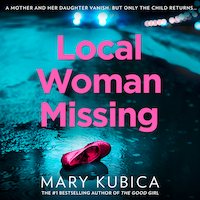 The chilling new thriller from master of suspense and New York Times bestseller Mary Kubica: A mother and her daughter vanish. But only the child returns . . .

When a local mother and her six-year-old daughter, Delilah, suddenly vanish, their close-knit suburban community is rocked by fear and suspicion. How could such a terrible thing have happened in their small town?

Then, eleven years later, Delilah shockingly reappears. Everyone wants to know what really happened to her. But there are secrets hidden deep in the past – and when the truth about those missing years begins to surface, no one is prepared for what they’re about to find out.

You won’t be able to stop turning the pages of LOCAL WOMAN MISSING, the chilling new thriller from master of suspense and New York Times bestseller, MARY KUBICA
____