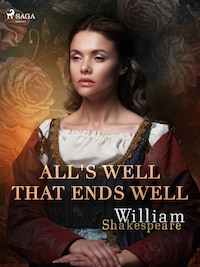 88 pages
AuthorWilliam Shakespeare
TypeE-book
SeriesWorld Classics
Categories
NovelsRomanceHumoristic NovelsRomanceRomanceComedy & HumorHumoristic NovelsClassicsDrama
Share this book
Helena is an orphaned daughter who has fallen madly in love with the arrogant Bertram. Helena is allowed to go to court and try her hand at curing the King's illness. Although others have failed, she succeeds and is granted permission to marry Bertram. To her sorrows however, he rejects her, turning out to be the beginning of a series of trials and tribulations Will Helena's efforts to corral her unwilling lover provide her with joyful fulfilment?
This is the romantic comedy play of all time, providing an incredible dance across gender, sex, morality, duty and honour, without taking a stance, but as everything is ultimately alright, all's well that ends well after all! Perfect for fans of ‘Notting Hill’ and Bridget Jones’s Diary’.
William Shakespeare (1564-1616) is widely considered the world's greatest dramatist and is often referred to as England's national poet or the Bard. Most famous for his timeless plays, he also wrote a multitude of poems and sonnets. Shakespeare was the blockbuster writer of his day, his many works concerning universal themes of life, love, death, revenge, grief, jealousy, murder, magic, and mystery. Among some of his most famous are ”Macbeth”, ”Romeo and Juliet”, and ”Hamlet”, but the list is long, and many continue to be studied and performed, both their original form and modern adaptations.