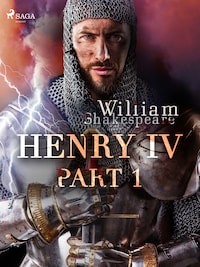 88 pages
AuthorWilliam Shakespeare
TypeE-book
SeriesWorld Classics
Categories
NovelsNovelsHistorical NovelsBiographiesClassicsDrama
Share this book
King Henry’s military plans are interrupted by the news that his army has been defeated in the South. The supposedly loyal Hotspur is refusing to send the soldiers he has captured in the north, forcing Henry to summon Hotspur back to the royal court in order to explain his actions.
In the midst of a kingdom filled with rebellion, betrayal and shifting alliances, king Henry is also dealing with a great disappointment in his son, Harry (Hal). Although often overshadowed by his son, King Henry still wishes him to be more like the fearless Hotspur. It is common knowledge that Harry, the heir to the throne, conducts himself in a way unbefitting to royalty. However, when the king faces a rebellion gathered by his former ally, Hal comes to his father’s aid.
But can he still redeem himself?
This play focuses particularly on the development of Prince Hal as he grows to become the man later known as Henry V.
Since it was first performed, this play has been extremely popular with both critics and the public. It reflects on the realities of wielding power, making this a brilliant classic worth reading. A perfect read for fans of the series ‘House of Cards’ and ‘Designated Survivor’. Reimagined in the Netflix film ‘the King’.
William Shakespeare (1564-1616) is widely considered the world's greatest dramatist and is often referred to as England's national poet or the Bard. Most famous for his timeless plays, he also wrote a multitude of poems and sonnets. Shakespeare was the blockbuster writer of his day, his many works concerning universal themes of life, love, death, revenge, grief, jealousy, murder, magic, and mystery. Among some of his most famous are ”Macbeth”, ”Romeo and Juliet”, and ”Hamlet”, but the list is long, and many continue to be studied and performed, both their original form and modern adaptations.