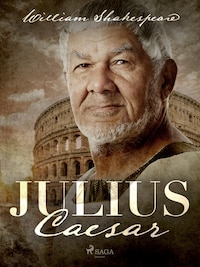 74 pages
AuthorWilliam Shakespeare
TypeE-book
SeriesWorld Classics
Categories
NovelsNovelsHistorical NovelsBiographiesClassicsDrama
Share this book
You might be familiar with modern-day tragedies such as ”The Atonement” by Ian McEwan, ”Lord of the Flies” by William Golding or ”Thirteen Reasons Why” by Jay Asher. If so, then William Shakespeare’s ”Julius Caesar” should be your next must-read. This historical play will take you through all the complicated friendship dynamics and political conspiracies your heart desires. You will be drawn into the ultimate battle for power at hand, enthralling and topical, this is a play for today.
First performed around 1599, as the successor of the British monarchy was on uncertain grounds, Julius Caesar is confronted by the dangers of political turmoil. Will Caesar achieve his desire to become an unassailable dictator, or will his aspirations only be in vain? This play stands, not only at the turn of a century but at the point in which Shakespeare emerged as the leading English language writer.
William Shakespeare (1564-1616) is widely considered the world's greatest dramatist and is often referred to as England's national poet or the Bard. Most famous for his timeless plays, he also wrote a multitude of poems and sonnets. Shakespeare was the blockbuster writer of his day, his many works concerning universal themes of life, love, death, revenge, grief, jealousy, murder, magic, and mystery. Among some of his most famous are ”Macbeth”, ”Romeo and Juliet”, and ”Hamlet”, but the list is long, and many continue to be studied and performed, both their original form and modern adaptations.