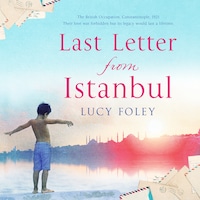 Each day Nur gazes across the waters of the Bosphorus to her childhood home, a grand white house, nestled on the opposite bank. Memories float on the breeze – the fragrance of the fig trees, the saffron sunsets of languid summer evenings. But now those days are dead.

The house has been transformed into an army hospital, it is a prize of war in the hands of the British. And as Nur weaves through the streets carrying the embroideries that have become her livelihood, Constantinople swarms with Allied soldiers – a reminder of how far she and her city have fallen.

The most precious thing in Nur’s new life is the orphan in her care – a boy with a terrible secret. When he falls dangerously ill Nur’s world becomes entwined with the enemy’s. She must return to where she grew up, and plead for help from Medical Officer George Monroe.

As the lines between enemy and friend become fainter, a new danger emerges – something even more threatening than the lingering shadow of war.