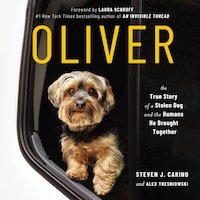 He Was Searching for a Lost Dog. He Found More Than He’d Ever Hoped For.

On Valentine’s Day 2019, someone stole Steven Carino’s dog, Oliver, from his car. Having lost his mother at thirteen and grown up with an alcoholic father, he could always count on his dogs for comfort and company. But now, with his beloved Oliver missing, Steven felt utterly alone.

Then, the miracle. In a series of near-impossible coincidences, people from different walks of life crossed paths with Oliver and with Steven. Hardworking immigrants, wealthy suburbanites, car mechanics, deli workers, old friends, close relatives, street cops, gang members, a TV news reporter, social media followers around the world, and one very gifted hairdresser all played a part in Steven’s desperate journey to find Oliver. In the middle of it all, Steven realized that no one is ever truly alone--and that the power of community can be life-changing.

Oliver is not just a book about a stolen dog. At its core, it’s a story about kindness, friendship, and the power of faith. As Steven says, “This is more than just a dog story. This is an everybody story. This is a love story.”

Bring Steven and Oliver's story to life with photos included in the audiobook companion PDF download.