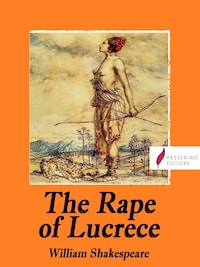 The rape of Lucrece

55 pages
AuthorWilliam Shakespeare
TypeE-book
Categories
NovelsNovels
Share this book
The Rape of Lucrece (1594) is a narrative poem by William Shakespeare about the legendary Roman noblewoman Lucretia. In his previous narrative poem, Venus and Adonis (1593), Shakespeare had included a dedicatory letter to his patron, the Earl of Southampton, in which he promised to compose a ”graver labour”. Accordingly, The Rape of Lucrece has a serious tone throughout.
The poem begins with a prose dedication addressed directly to the Earl of Southampton, which begins, ”The love I dedicate to your Lordship is without end.” It refers to the poem as a pamphlet, which describes the form of its original publication of 1594. The dedication is followed by ”The Argument”, a prose paragraph that summarizes the historical context of the poem, which begins in medias res. The poem contains 1,855 lines, divided into 265 stanzas of seven lines each. The meter of each line is iambic pentameter. The rhyme scheme for each stanza is ABABBCC, a format known as ”rhyme royal”, which has been used by Geoffrey Chaucer, John Milton and John Masefield.

William Shakespeare (26 April 1564 – 23 April 1616) was an English playwright, poet, and actor, widely regarded as the greatest writer in the English language and the world's greatest dramatist. He is often called England's national poet and the ”Bard of Avon” (or simply ”the Bard”). His extant works, including collaborations, consist of some 39 plays, 154 sonnets, three long narrative poems, and a few other verses, some of uncertain authorship.
His plays have been translated into every major living language and are performed more often than those of any other playwright.