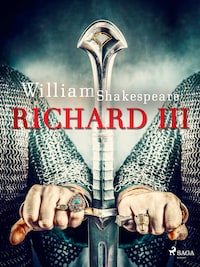 105 pages
AuthorWilliam Shakespeare
TypeE-book
SeriesWorld Classics
Categories
NovelsNovelsHistorical NovelsBiographiesClassicsDrama
Share this book
In this magnificent historical adventure, William Shakespeare presents a story on the rise to power and subsequent short reign of King Richard III of England. Malicious, power-hungry, and bitter, Richard aspires to the throne. The trail of cold-blooded murder starts in the midst of deception and political manipulation, but will Richard be able to stay in control in his ruthless strategies for ultimate power? This historical fiction set in England truly display the power of language, as for Richard, it is a vital weapon he uses to manipulate, confuse, and control those around him.
”Richard III” stages an important turning point in English history: the end of the Wars of the Roses and the rise to power of the Tudor dynasty in the figure of Henry VII.
For fans of ‘House of Cards’ & ‘Designated Survivor’.
William Shakespeare (1564-1616) is widely considered the world's greatest dramatist and is often referred to as England's national poet or the Bard. Most famous for his timeless plays, he also wrote a multitude of poems and sonnets. Shakespeare was the blockbuster writer of his day, his many works concerning universal themes of life, love, death, revenge, grief, jealousy, murder, magic, and mystery. Among some of his most famous are ”Macbeth”, ”Romeo and Juliet”, and ”Hamlet”, but the list is long, and many continue to be studied and performed, both their original form and modern adaptations.