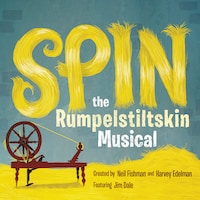 SPIN - THE AUDIOBOOK MUSICAL: A witty musical re-imagining of Grimm’s fairy tale, Rumpelstiltskin, created by musical theatre veterans, narrated by Jim Dale, and featuring a cast of Broadway musical stars. The story takes place in a Nice Little Kingdom, and ignites when a foolish miller brags that his daughter, Jane, can spin straw into gold.  Since she cannot perform such a miracle, Jane desperately enlists the powers of a magical being…Rumpelstiltskin… in exchange for a promise with dire consequences. A fun, fractured fairy tale for the entire family.