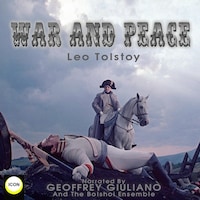 15h 51m
NarratorGeoffrey Giuliano And The Bolshoi Ensemble
TypeAudiobook
Categories
NovelsRomanceHistorical NovelsWar NovelsRomanceHistoric Romance
Share this book
Arguably the greatest literary masterpiece, War and Peace is an amazing blend of philosophy, history, spirituality, and love told through two families, the Rostovs and the Bolkonskys. The Rostovs personify the Russian spirit. Count Rostov, a generous, kind spendthrift, can deny his family nothing. His countess is a warm, loving, overindulged woman. These characteristics are reflected in their children, while the austere Bolkonskys are duty-bound. As normal human beings do, the three main characters grow, expand, and change over the course of fifteen years (1805-1820) beginning when Natasha Rostov is a young girl. It is a joy to watch her evolve into a beautiful, mature woman who loves two men: Prince Andrey Bolkonsky, an elegant, aristocratic army officer, and his friend, Count Pierre Bezukhov, a bear of a man who seeks answers to life in Freemasonry, mysticism, and superstition, and finally finding them in the philosophy of Platon Karatayev, an illiterate peasant soldier. Andrey and Pierre argue the plight of the peasants, the rights of the aristocracy, and the merits of war, mirroring Tolstoy’s own reflections. The main focus is Napoleon’s invasion of Russia and his ignominious retreat.
Produced by Macc Kay
Production executive Avalon Giuliano
ICON Intern Eden Garret Giuliano
©2021 Eden Garret Giuliano (P) 2021 Eden Garret Giuliano
Geoffrey Giuliano is the author of over thirty internationally bestselling biographies, including the London Sunday Times bestseller 'Blackbird: The Life and Times of Paul McCartney' and 'Dark Horse: The Private Life of George Harrison'. Dasa can be heard on the Westwood One Radio Network and has written and produced over seven hundred original spoken-word albums and video documentaries on various aspects of popular culture. He is also a well-known movie actor.