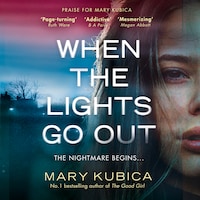 When The Lights Go Out

Mary Kubica is back with a bang in this compulsively gripping tale of obsession and desperation.

As far as the world’s concerned, she’s already dead

Jessie Sloane is getting her life back on track after caring for her sick mother. But she’s stopped short when she discovers, that according to official records, ‘Jessie Sloane’ died seventeen years ago.

So why does she still feel in danger?

Thrown into turmoil and questioning everything she’s ever known, Jessie’s confusion is exacerbated by a relentless lack of sleep. Stuck in a waking nightmare and convinced she’s in danger, she can no longer tell what’s real and what she’s imagined.

The truth lies in the past…

Twenty years ago, another woman’s split-second decision may hold the key to Jessie’s secret history. Has her whole life been a lie? The truth will shock her to the core…if she lives long enough to discover it.

‘One of the very best thrillers I’ve read – ever.’

‘Kept me guessing the whole way through. Sheer genius.’

‘The ending is a real twist of the knife – it doesn’t get much better than this.’

‘A very fast paced story which keeps you guessing till the end and what a twist!’

‘Omg! This is one of the best books that I have ever read! Great thriller, love it!’