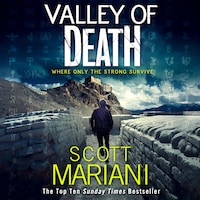 ‘If you like your conspiracies twisty, your action bone-jarring, and your heroes impossibly dashing, then look no farther’ MARK DAWSON

People going missing in the remote wilds of India is not unusual. But when the son of a wealthy Delhi businessman is kidnapped just weeks after his brother fell victim to an alleged bandit attack in the mountains of Haryana, it raises eyebrows.

With the local police doing close to nothing, there’s only one man for the job: ex-SAS major Ben Hope. But for Ben, this is no ordinary rescue case. Because this plea for help is coming from a special person from his past, who now has nobody else to turn to.

Ben’s mission will take him into the heart of the arid Indian wilderness, pitting him against ruthless gangs and desperate men. But Ben is determined to save the day. Whatever it takes.

Whilst the Ben Hope thrillers can be read in any order, this is the nineteenth book in the series.