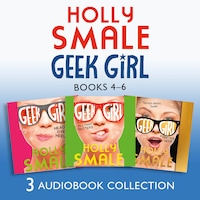 ‘My name is Harriet Manners, and I am a geek.’

ALL THAT GLITTERS
Harriet Manners knows many things. She knows that toilet roll was invented by the Chinese in 600 AD. She knows that a comet’s tail always points away from the sun. And she knows that the average healthy heart beats seventy times per minute. Even when it’s broken.

But she knows nothing about making new friends at Sixth Form. Or why even her old friends seem to be avoiding her. And she knows even less about being a glittering supermodel success. Which she now is – apparently.

HEAD OVER HEELS
Harriet Manners knows almost every fact there is. She knows duck-billed platypuses don’t have stomachs. She knows that fourteen squirrels were once detained as spies. She knows that both chess and snakes and ladders were invented in the same country.

And for once, Harriet knows exactly how her life should go. She’s got it ALL planned out. So when her friends seem less than happy, Harriet is determined to Make Things Happen!
If only everyone else would stick to the script…

FOREVER GEEK
Harriet Manners knows almost every fact there is. Modelling isn’t a sure-fire route to popularity. Neither is making endless lists. Statistically you are more likely to not meet your Australian ex-boyfriend in Australia than bump into him there.

So on the trip of a lifetime, Down Under, Harriet’s to-do lists are gone and it’s Nat’s time to shine! Yet with nearly-not-quite-boyfriend Jasper back home, Harriet’s completely unprepared to see supermodel ex Nick. Is the fashion world about to turn ugly for GEEK GIRL?