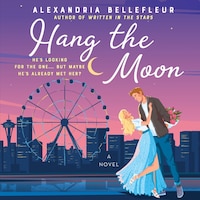 In a delightful follow-up to Written in the Stars, Alexandria Bellefleur delivers another #ownvoices queer rom-com about a hopeless romantic who vows to show his childhood crush that romance isn’t dead by recreating iconic dates from his favorite films...

Brendon Lowell loves love. It’s why he created a dating app to help people find their one true pairing and why he’s convinced “the one” is out there, even if he hasn’t met her yet. Or... has he? When his sister's best friend turns up in Seattle unexpectedly, Brendon jumps at the chance to hang out with her. He’s crushed on Annie since they were kids, and the stars have finally aligned, putting them in the same city at the same time.

Annie booked a spur-of-the-moment trip to Seattle to spend time with friends before moving across the globe. She’s not looking for love, especially with her best friend’s brother. Annie remembers Brendon as a sweet, dorky kid. Except, the 6-foot-4 man who shows up at her door is a certified Hot Nerd and Annie... wants him? Oh yes.

Getting involved would be a terrible idea—her stay is temporary and he wants forever—but when Brendon learns Annie has given up on dating, he’s determined to prove that romance is real. Taking cues from his favorite rom-coms, Brendon plans to woo her with elaborate dates straight out of Nora Ephron’s playbook. The clock is ticking on Annie’s time in Seattle, and Brendon’s starting to realize romance isn’t just flowers and chocolate. But maybe real love doesn’t need to be as perfect as the movies... as long as you think your partner hung the moon.