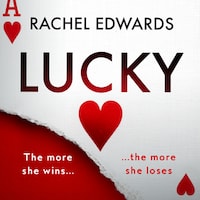 A tense novel about race, power, betrayal, survival – and an addiction so compelling it threatens to destroy everything in its path

‘A fresh, exhilarating voice’ Adele Parks‘Impossible to put down’ Louise Hare, author of This Lovely City

‘I devoured it’ Erin Kelly, author of He Said/She Said

Etta wants to get married. Ola, her partner, says he does too, but he’s also allergic to making concrete plans and keeps insisting that they save enough for a house deposit before they even think of marriage.
So Etta finds a way to start secretly making money: online gambling. And how lucky that she just happens to be so good at it.

Soon she’s playing quite a lot. She doesn’t like lying to Ola, but it’s all for the good of their relationship. She’s even made a friend on the site, StChristopher75, and she’s invited to a special VIP party. And even if she is losing a little money here and there – or even quite a lot – she’ll win it back eventually. In the mean time, perhaps StChristopher75 can help her out with a little loan, once she’s met him in real life. He’s just won big, and he’s been so friendly and helpful.

And he says her photo’s hot. Why wouldn’t he want to help her?