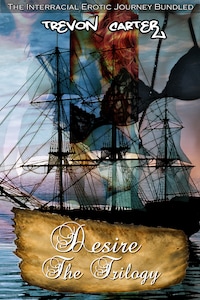 168 pages
TypeE-book
SeriesDesire
Categories
NovelsRomanceHistorical NovelsRomanceRomanceHot RomanceHistoric Romance
Share this book
Theresa is the wife of the Captain of the Desire, the first ever American built slaver ship used to bring in cargo straight from Africa. As she joins her husband, she meets the First Mate's wife, who teaches her a thing or two about how the big black men should really be used. This historical, erotic romance bundles together all three books of the Desire series into one hot read!
Desire
Theresa is the wife of Captain Adam Phillips, who commands the first ever American built slaveship, the Desire. She decides to accompany her husband for the first time on his journey across the seas to trade the natives for Africans. The first mate's wife, Alana, runs into her and helps her grow accustomed to ship life. They grow close as the Desire makes its way to Africa.
Theresa enjoys Alana's brash, outgoing and honest personality and begins to learn that being prim and proper is not the only way to live life as the wife of a Captain. When they arrive in Africa, Theresa accidentally glances over to see naked Africans board the Desire. She is stunned by their bodies and their... generous proportions.
Alana, unlike Theresa, has been on many journies to Africa with her husband and she has a little secret. She knows the pleasures that the muscular black males can provide! After the slaves are loaded on the Desire, the ship docks in a private area for a short rest before the long journey back home. Alana manages to get Theresa off the boat and onto the beaches to show her the true power of the ebony beasts that they are shipping back home.
Desire Across the Seas
Days have passed since Theresa first saw what a black man could do. She's been trying to get close to her friend Alana, but is unsuccessful in reaching her on the ship. As her cravings of pleasure build, she finally manages to get a hold of her more experienced friend. Alana accidentally let's it slip that Theresa's husband, Adam, the very Captain of the Desire has been partaking in the pleasures of the ship's cargo.
Theresa doesn't believe her and asks Alana for proof. Alana initially hesitates but eventually gives in, leading her down in the middle of the night to see Adam in the act. Alana holds Theresa back and tells her not to retaliate but get revenge in a different manner, a more pleasurable manner. Theresa learns that Alana was in the same position years ago.
Alana offers to teach Theresa to take on the powerful Africans aboard the ship like her. Theresa isn't sure at first but her cravings and her thirst for revenge are too much to bear. As the Desire journeys across the seas, Alana teaches Theresa how to quell her desires with the power of the black men within the ship. Alana and Theresa creep down to the deep, dark, underbelly of the ship where they experience pleasures that only three big, black, powerful Africans can provide...
Desire Upon the Lands
The Desire makes a stop at Kingston, to resupply. Alana entices Theresa to visit the beautiful island and discover the pleasures that lie hidden within. Theresa agrees to join and discover the pleasures that Alana speaks of. As the 2 roam the island, Alana takes her to a quiet house. Within the house, the two experience pleasures beyond imaginable as a dozen black men surround them in the dark...