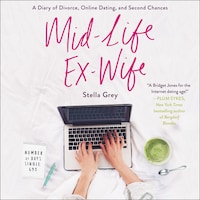 “The literary equivalent of the When Harry Met Sally line, ‘tell me I’ll never be out there again’.”—JoJo Moyes, #1 New York Times bestselling author of Me Before You

Singers may croon about love being lovelier the second time around, but it can also be far more complicated. When Stella Grey’s husband leaves her for another woman, she fears she'll be unhappy and alone for the rest of her life. But daytime vodka-drinking and ice-cream are only short-term consolations. Realizing that she needs to take her future into her own hands, Stella dives into the world of online dating. What follow are 693 days of hilarious, depressing, and baffling encounters that unfold both in person and online. Stella quickly discovers that the more perfect a man appears on her screen, the warier she should be. It's a game of chance, with some players perfectly willing to lie to get what they want, whether that’s a lifetime of love or a very brief encounter.

Amid flirty emails, Skype chats, and awkward small talk over glasses of bad wine (which may or may not lead to awkward sex), Stella struggles to remain optimistic. To succeed, does she have to redefine the kind of man she’s looking for—or change the kind of woman she is? Funny, raw, and heartwarming, this book is a brutally honest account of the world of online dating—a world which so many of us are a part of, no matter our age—drawn from Stella’s hugely popular Guardian column, “Mid-life Ex-Wife” (and expanded with new material) about her search for a second chance at love.