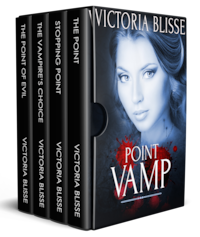 Love conquers all, that is the point, but can it bridge the differences between a vampire and a woman?

Hugh is twenty eight. He has been twenty eight for nearly one hundred years. Hugh is a vampire. He owns a club called The Point and he pays girls to have sex with him. He then counts to ten as he sucks their blood to semi-satisfy his lust.

Elizabeth is a doctor, she loves her job but likes to escape into the countryside now and then. When she twists her ankle Hugh comes to her aid. He carries her curvy form all the way back to his home. He takes care of her ankle and the rest of her body too but he goes too far and sucks her perfectly intoxicating blood.

How can these two lovers have any kind of relationship? They don't know, only time will reveal the answers.

Josh is a vampire…he just doesn't quite know it yet.

He is confused and his voluptuous sire, Cara is far too busy being mysterious to really help him unlock the secrets of his Afterlife. However, he pieces it together by himself and decides to turn his best mates into Vampires too. This doesn't quite go to plan but he does discover The Point and its unique, ten-second rule.

Cara does not approve of Josh visiting The Point but that night she turns up at his door bloodied and much more dead than usual, and accepts Josh's help to escape from her much older and much crazier Sire Leopold. How is Josh going to defeat an older, wiser and more powerful vampire? He hasn't a clue but for Cara he is willing to find out.

A crazy vampire or an ice-queen human, it's not much of a choice but it is the one Kyle has to make.

Kyle may be undead, but he still lives at home with his Gran and works in a supermarket stacking shelves with his mates. His life hasn't changed much, apart from being dead and having to suck blood from live humans to survive.

Luckily he knows The Point, a vampire bar where the humans are hot, tasty and eager to please. Well, most of them are. Janine is the exception. She is cold and distant, but from the first time he meets her, Kyle is smitten.

But he has a problem. A hot but crazy female vamp has got him in her sights and she'll stop at nothing to get him all to herself.

Kyle has a decision to make and it will change his afterlife forever. Who will he choose?

The Point of Evil

Blood and sex were all he ever wanted until love gave him something worth living an eternity for.

Steve—who had been a womanizer in life and was even more so in death—prowls the Point using his vampiric wiles to get the blood and sex he craves. He’s always looking for his next meal and when he sees a tall, curvy beauty with a red scarf around her neck, he thinks he’s found it.

Eloise is different—she’s shy and needs encouragement, and Steve just can’t get her out of his mind. He has to take his time, get to know her and slowly seduce her. When she disappears, leaving only a note begging him not to pursue her further, he can’t help himself and ends up in the service of George Aquino, a vampire crime boss with a penchant for twisted and cruel torture and a dungeon full of prisoners.

A daring rescue, a difficult choice and love against the odds. Do you dare visit the point of evil?