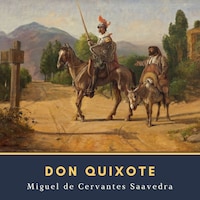 The Ingenious Gentleman Don Quixote of La Mancha (Modern Spanish: El ingenioso hidalgo (in Part 2, cavallero) Don Quijote de la Mancha), or just Don Quixote, is a Spanish novel by Miguel de Cervantes. Published in two parts, in 1605 and 1615, Don Quixote is the most influential work of literature from the Spanish Golden Age and the entire Spanish literary canon. A founding work of Western literature, it is often labeled the first modern novel and is sometimes considered the best literary work ever written.

The plot revolves around the adventures of a noble (hidalgo) from La Mancha named Alonso Quixano, who reads so many chivalric romances that he loses his mind and decides to become a knight-errant ( caballero andante) to revive chivalry and serve his nation, under the name Don Quixote de la Mancha. He recruits a simple farmer, Sancho Panza, as his squire, who often employs a unique, earthy wit in dealing with Don Quixote's rhetorical monologues on knighthood, already considered old-fashioned at the time. Don Quixote, in the first part of the book, does not see the world for what it is and prefers to imagine that he is living out a knightly story.

The book had a major influence on the literary community, as evidenced by direct references in Alexandre Dumas' The Three Musketeers (1844), Mark Twain's Adventures of Huckleberry Finn (1884), and Edmond Rostand's Cyrano de Bergerac (1897), as well as the word quixotic and the epithet Lothario; the latter refers to a character in El curioso impertinente ( The Impertinently Curious Man), an intercalated story that appears in Part One, chapters 33–35. The 19th-century German philosopher Arthur Schopenhauer cited Don Quixote as one of the four greatest novels ever written, along with Tristram Shandy, La Nouvelle Héloïse, and Wilhelm Meisters Lehrjahre.

When first published, Don Quixote was usually interpreted as a comic novel. After the French Revolution, it was better known for its central ethic that individuals can be right while society is quite wrong and seen as disenchanting. In the 19th century, it was seen as a social commentary, but no one could easily tell whose side Cervantes was on. Many critics came to view the work as a tragedy in which Don Quixote's idealism and nobility are viewed by the post-chivalric world as insane, and are defeated and rendered useless by common reality. By the 20th century, the novel had come to occupy a canonical space as one of the foundations of modern literature.