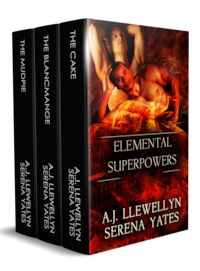 Baking the best cupcakes in San Francisco is Daine's true calling…who knew that the tastiest cakes could lead to a talent for danger?

Phillip Sedgwick is a lawyer who works for an unusual law firm: Arden, Bainbridge, Chinook and Damek is the supernatural world's most prestigious company, protecting, and often prosecuting, members of the supernatural world for various crimes and infractions. His latest case involves the owner of Fabulous Cupcakes, Daine Paradis, who has been accused of abuse of his superpowers.

Daine is proud that he's been able to keep his father's bakery going and has made it a huge success. Weird things start happening, and hard work no longer seems enough to stay in business. When he meets Phillip the sparks fly, but will the two men be able to solve the case before everything goes up in flames?

Finn Garrison is a Water Mage who lives in Bermuda and teaches swimming to water-phobes, assists in the salvage of ship wrecks and rehabilitates local wildlife in his spare time. When he gets called to be a juror in a high profile Water Court trial and his life is endangered, he knows he needs help.

Ty Anglin is an experienced Water Marshal who doesn't really want to become someone's glorified bodyguard. When he meets Finn, he's not only attracted to him, but also suddenly very protective. Two attempts on Finn's life later, they are both sure there is more going on than meets the eye.

Will they be able to find out who is behind the assassinations? Was the sea monster on trial really framed? And are freshwater people really being discriminated against by their saltwater cousins?

Mitchell is proud of his new wrestling persona and trading card, but he hadn't planned on actually facing his wrestling hero, Whip "Mudshark" Jackson, in the ring…

Geeky Mitchell Dykins loves his new job as marketing manager for a wrestling federation's participants. After creating a huge online campaign for his company's wrestlers, he befriends the most fearsome warrior of them all, Whip "Mudshark" Jackson. Whip is so thrilled with Mitchell's work, he demands that the company create a wrestling persona for Mitchell and therefore he'll get his own trading card. Mitchell is tickled. This is all good, right?

Unfortunately Mitchell soon finds himself transformed into his wrestling persona, "Mudpit Madman". When he starts waking up covered in mud, Mudshark lying beside him, he begins to worry. The worst of it is when he defeats Mudshark who then puts a contract out on Mudpit.

Whip claims he knows nothing about what his alter ego is doing. He likes Mitchell. But his muddy wrestling character seems to have a mind of his own…can he be telling the truth?

Is Mitchell completely nuts to still like a guy who probably wants him dead?