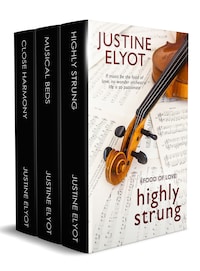 The Food of Love series

If music be the food of love, no wonder orchestral life is so passionate.

The new violinist with the Westminster Symphony Orchestra knows she shouldn’t have a crush on its glamorous leader, Milan Kaspar, but Lydia just can’t help wanting a piece of the arrogant Czech virtuoso. Capturing his attention by refusing to play along with his plans for the orchestra, she soon finds herself drawn into his bed—a bed he shares with lovers of both sexes. But Lydia wants more than wild and inventive sex—she wants to get behind Milan’s sophisticated veneer, to find the man inside the performer. She seems doomed to failure, until a trip to his home country changes everything…

Can hope come from heartbreak? Music and passion rule the lives of Milan and Lydia, building bridges between them even when all seems lost.

After Lydia leaves a grieving Milan behind in Prague, their tempestuous relationship seems to be over. But chance throws them back together again when Milan is given the career opportunity of a lifetime.

Lydia is thrown off course by his self-destructive behaviour and, as much as she loves him, she can't be sure that she will ever be able to live with him. Then the issue is further confused by the arrival of a handsome and intriguing conductor from Germany…Meanwhile, Lydia's friend Vanessa is finding herself strongly drawn to her percussionist colleague—a man young enough to be her son.

Affairs of the heart run riot through the Westminster Symphony Orchestra. Will they ruin an important television broadcast, or will the musicians find love and peace at last?

How do you choose between two perfect men? It's like choosing your favourite music—certain pieces suit certain moods. Which mood is Lydia feeling the most?

The autumn season of the Westminster Symphony Orchestra finds Lydia unable to choose between passionate Milan and dominant Karl-Heinz—so she decides to give them both a chance. She hops from one bed to the other, trying to weigh up her options. Milan has a hold on her heart, but has never been reliable. Karl-Heinz is a good man, but what is the secret behind his strange repression? Old rivalries and new jealousies are kindled while Lydia works hard at having the time of her sex life.

No trio has ever practised quite as hard as this…But there is trouble in paradise for Ben and Vanessa, too, as a face from Vanessa's past makes an unwelcome appearance and all seems impossible to resolve.

Amid turbulent emotions and orchestra rehearsals, the musicians work hard to negotiate a path to happiness. Will music prove to be the food of love, or a poison, infecting the future?