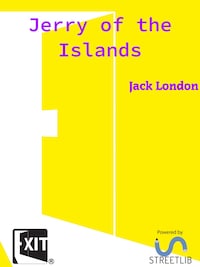 Jerry of the Islands

It is a misfortune to some fiction-writers that fiction and unveracity in the average person’s mind mean one and the same thing.  Several years ago I published a South Sea novel.  The action was placed in the Solomon Islands.  The action was praised by the critics and reviewers as a highly creditable effort of the imagination.  As regards reality—they said there wasn’t any.  Of course, as every one knew, kinky-haired cannibals no longer obtained on the earth’s surface, much less ran around with nothing on, chopping off one another’s heads, and, on occasion, a white man’s head as well.

Listen.  I received a letter the other day from Mr. C. M. Woodford, Resident Commissioner of the British Solomons.  He was back at his post, after a long furlough to England, where he had entered his son into Oxford.  A search of the shelves of almost any public library will bring to light a book entitled, “A Naturalist Among the Head Hunters.”  Mr. C. M. Woodford is the naturalist.  He wrote the book.

To return to his letter.  In the course of the day’s work he casually and briefly mentioned a particular job he had just got off his hands.  His absence in England had been the cause of delay.  The job had been to make a punitive expedition to a neighbouring island, and, incidentally, to recover the heads of some mutual friends of ours—a white-trader, his white wife and children, and his white clerk.  The expedition was successful, and Mr. Woodford concluded his account of the episode with a statement to the effect: “What especially struck me was the absence of pain and terror in their faces, which seemed to express, rather, serenity and repose”—this, mind you, of men and women of his own race whom he knew well and who had sat at dinner with him in his own house.