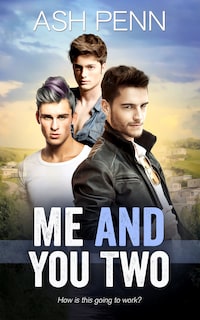 Me and You Two

Dean’s not into relationships and Pieter’s already in one. Phoenix doesn’t know what he wants, but he’s pretty sure it’s Dean. How’s this going to work, exactly?

Ever since dropping out of high school, Dean Garner has lived down to his estranged family’s expectations. Enjoying a quiet, if decadent, life as a barman in one of his parents’ holiday parks, he romances whoever takes his fancy. The affairs are brief, frequent and empty. That suits Dean, who has had his heart broken once and doesn’t intend to let it happen again.

When Pieter Croft enters his life, Dean’s happy that he’s met someone equally casual when it comes to sex. But as they grow closer, Dean can’t deny he’d like to get to know the mysterious Pieter a little better.

Tracking down where Pieter lives is easy, but what Dean finds when he gets there is…complicated.

Pieter has a secret. A secret called Phoenix. While Phoenix is everything to Pieter, Dean can’t decide if he’s a blessing or a curse. The one thing he does know is that the two of them are inseparable. If he wants Pieter, he’s going to have to take on Phoenix, too.