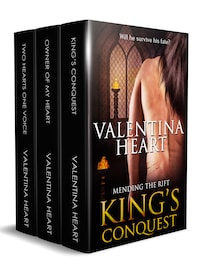 The Mending the Rift series

The only way for Prince Rin to save his kingdom is to marry a king and bear a child, but will he survive his fate?

In a world where two kingdoms are constantly at war, Prince Rin, heir to the throne of the Kari kingdom, has been demanded as a war conquest by King Merinej of Jeda. The prince must travel to his enemy’s kingdom and share the king’s bed, bearing him a child, or the war will continue. But the prince will not lower himself to what he sees as nothing but the title of a whore, so he demands a contract requiring the king to be faithful to him. After all, giving Merinej a child will threaten Rin’s life.

Even going into the marriage headfirst, Rin expected nothing more than a business arrangement. Instead, he receives affection, yet the more surprising realization is his willingness to give love back. However, the king cannot save Rin from those who wish him harm, and their union might be over before it can fully bloom.

Owner of my Heart

Can King Merin face his loss, save his husband and protect his kingdom, or have his enemies finally found a way to defeat him?

When an enemy Merin thought defeated takes his unborn children away from him, he’s at the end of his rope and still has to find enough strength to save his husband Rin from the clutches of sorrow. Unable to find peace, they must deal with an aggressor who plots to ruin any chance of happiness they might have. To make things worse, the newly united countries must prepare for a war against a vicious invading army that’s using the weakened state of the kingdom for its benefit.

How will Merin and Rin recover from their terrible loss and give their people heirs? Will the newly united countries work together as one to save Merin’s kingdom—and his family—from the ongoing dangerous challenges? Can love truly push through all obstacles, or will their enemies discover their weaknesses and finally achieve victory?

They are at war, fearing for each other, struggling with the upbringing of their children and the survival of their country. They are kings.

With the future of the throne secured, Rin and Merin still have little time to rejoice for their children or the unity of their kingdoms. Stuck in the middle of a battlefield, their lives prove to be once again at risk, and Rin heads out on a long journey home with his heirs, leaving Merin to lead their army.

Rin receives his rightful title of king from the Kari council and for once feels as if he belongs on the throne without Merin there to guide him. Missing his husband, he raises their children the best he can, but there’s no end to the war in sight and, after months of futile conflicts, Rin thinks he sees Merin cut down in battle.

Distraught and with no patience for his council, Rin threatens the Riki, making even his own men fear him. Can Rin cope alone without the love of his life and still win the war, or will his sorrow mark the end of his reign?