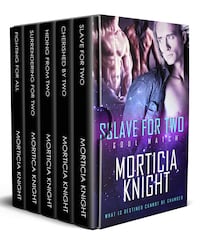 What is destined cannot be changed.

Chris has had a monumentally bad month. First, an aggressive band of aliens invaded the Earth, conquered the world, and now he’s fighting for survival in the mountains with his family and the neighborhood bigot. Just because he’s barely out of his teens and a bit on the scrawny side doesn’t mean he can’t watch out for his mom, sisters and younger cousin. Chris keeps searching for the brighter side of things, but his humor is wearing thin. Fear can do that to a guy.

Lasar and Nary are a soul matched pair of warriors from Alashar. Lasar is Nary’s Ahna, the one who dominates him, and Nary is the Nasha, or submissive, to Lasar. Every Alasharian, regardless of orientation, needs the balance of the power exchange to exist peacefully within their lifelong soul match bond. When Lasar is awarded a war prize, he sends Nary to look over the recent arrivals.

Chris and his cousin Morgan are captured and sent to the slave cages where they discover from the other imprisoned young men that they are destined to be sex toys for alien pairs. When one of those aliens saves Chris and his cousin from being abused by the slave master, Chris hopes that the seemingly kind alien won’t be too horrible an owner.

Lasar and Nary are finally alone together with their new sex slave, ready to enjoy their reward. However, in the middle of their playtime a shocking event occurs that not only disrupts Chris’ world even more than it already has been, but also challenges everything that Lasar and Nary have always held dear. As Lasar searches for answers, he begins to question the reasons behind the Earth invasion and where his loyalties should really lie. As their Ahna, he must be the one who decides whether they will all be safer together, or apart.

Destiny rewards those who embrace it.

Chris and his alien soul matches, Lasar and Nary, are ready to deepen their new bond as mates. It’s also time for Chris to begin his training as a Nasha, or sub, and for Nary to embrace his new role as Ahna, or Dom, to Chris. As three in the soul match, they are unique. Not only have Alasharians never matched with a human, they’ve never matched as three.

What makes them special also puts them in danger. The Supreme Soul Healer warned Chris that many changes were ahead, ones even more startling than the original invasion. They must keep their bond a secret until they know who they can trust.

As Ahna to both Nary and Chris, Lasar carries the responsibility of protecting his mates. A proud Alasharian warrior and commander, he’ll stop at nothing to keep them safe and to help Chris find his missing mother and sisters. To make sure that Chris’ cousin Morgan isn’t sent back to the slave cages, he’s also arranged for a fellow commander to take Morgan into his care when he returns from battle.

Lasar and Nary are invited to a pleasure party by the Alasharian’s leader, the Nall, and are forced to bring Chris and Morgan. But a terrifying turn of events sets in motion what might be the beginning of the end for them all, unless they can resist the void.

Embracing destiny was never meant to be easy.

Morgan can’t figure out where he belongs anymore now that a new world has emerged in the aftermath of the Alasharian invasion of Earth. Everything is too strange and frightening and all he wants to do is hide from it all. It doesn’t help to ease his confusion when he finds himself being drawn to not one but two aliens. He thought his cousin Chris was insane to fall in love with the muscled warriors who bonded with him as his mates, but his own heart might be in danger when it comes to the warrior Rama, and Hallosh, an advisor to the Alasharian’s Supreme Commander, the Nall.

Chris experiences a terrifying vision from the Soul Healer and it becomes clear that both Alasharian and humans are running out of time to save the Earth from the insidious spread of the Void. A battle is imminent and it becomes imperative to protect those who are allied against the evil that has corrupted the Nall.

Everything on Earth is about to change once again and Morgan finds himself at the brink of discovering his own destiny—and how the two aliens he can’t get out of his mind will be a part of it. A disturbing event triggers the beginning of the fight against the Void. Chris and Morgan must separate for the first time since the invasion, with each of them leaving with their own soul matches. For Morgan, he hopes the goodbye he says to Chris won’t be forever.

Strength is found when surrendering to destiny.

Graham has suffered way too much at the hands of the Nall. Ever since he was enslaved after the invasion, he’s been raped and tortured by the Alasharian Supreme Commander and his cohorts. Condemned to die by hanging for his part in the human rebellion, Graham gives in to the inevitable, no longer caring if he lives or dies. But an unexpected event occurs and, at the last moment, Graham is saved.

Balor is a guard to the Nall, but he’s also a part of the growing rebellion among the Alasharians. When one of the Nall’s advisors enlists his help in getting a human prisoner to safety, Balor comes to his aid. Startled by the soul match hum that sparks to life when he touches Graham, but unable to do anything about it, Balor is determined to protect his human match at all costs. When Advisor Oman arrives on the scene to rescue Balor as he helps Graham to escape, it becomes clear that yet another alien/human triad is forming—even if Graham may never accept being bonded to two aliens after the trauma he’s endured at the hands of Alasharians.

The time has come to depart to the secret military complex where the human and Alasharian allies will stage their final assault against the Nall and the Void. Families are reunited and others torn apart as they prepare for battle. The allies fear what will become of them all if Chris, the special human Sha Sha Ar has chosen as their spiritual leader, is no longer there to guide them.

Bravery will lead you to your destiny.

The human and alien rebellion is at hand, but those who have already arrived at the secret military facility are without the one who has inspired them to stand against the Nall. Chris, the human chosen by the Alasharian spiritual leader Sha Sha Ar, has been missing since the escape to the hideout. Those who have never seen Chris before, have only heard tales of his visions, begin to doubt his existence. Fear spreads through the group as humans and Alasharians alike wonder if they’re all doomed, if maybe Chris is a fantasy or has already fallen at the hands of the Nall.

Graham, Morgan and their Alasharian matches stand before the terrified group to reassure them that Chris is real. They’ve barely begun to speak when they are forced to fight an unexpected foe. But before the final battle against the Nall and the Void begins, all must search within themselves to discover what part they will play to achieve their destiny—and to summon the bravery they’ll need to see it through.