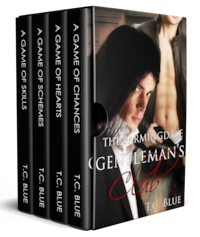 A Game of Chances

Two men, too many secrets, and even more situations trying to keep them apart. Can love really conquer all?

A meeting brought on by seeming coincidence throws Marcus and Tanner together. After becoming friends, certain truths are revealed, leading to feelings of betrayal as well as a degree of danger.

Tanner has more secrets than one man ever should, not the least of which is that he's an operative for a gray-ops organisation that's something of a family business. Sharing even that much information could kill more than just his friendship with Marcus. When one misstep on Tanner's part plants possible danger in Marcus' lap, he does what he needs to do.

Marcus doesn't know that Tanner is after the man Marcus used to date, but he for damned sure finds out, and that's just the start of things. When a computer disc and men with guns come into play, Marcus has some decisions to make. Like whether he can forgive Tanner for making him love a lie… and how far Marcus is willing to go to secure his own happiness.

A Game of Skills

A lot of things happen within the confines of a grey-ops organisation whose services are offered to the highest bidder. Sometimes even love, though that may well be easier said than done.

The last thing Simon is expecting when his latest Game goes thoroughly wrong is to be rescued by a man he doesn't know and an oddly intelligent child, but that's exactly what happens. He's pulled from the proverbial fire by the strange duo. That would have been fine if he hadn't developed some unexpected and unwelcome attraction to the man, Morgan.

Morgan's been running for years, trying to keep his best friend, Ellie's, child from the clutches of what he's sure is a group Rico wants no part of. Helping Simon is barely tolerable. Developing feelings for the secretive man is less so.

Between Simon's organisation, the Farmingdale Gentleman's Club, and whoever's after Rico, Morgan's pretty sure that he and Rico are screwed. When things come to a head, he has to make some hard choices, which might or might not involve Simon.

A Game of Hearts

What's the difference between a fling and a relationship? Three spies are about to find out.

Morgan and Simon are settled and happy together, or as much as they can be given their high-octane positions as operatives of the Farmingdale Gentleman's Club. So why are they both having unexpected longings and thoughts about their teammate, River? Sure, he's gorgeous but he's a bit of a player, and neither Simon nor Morgan are willing to risk their relationship on a fling.

Try as he might, River can't seem to resist his attraction to his team leader, Simon, or Simon's mate, Morgan. He also can't quite let himself intrude on their relationship until he receives a rather unique offer from the two men. It's a fairly casual arrangement, but when things get rocky on a Game in Prague, things come to a head.

Can three very different men find a way to make love work? Easier said than done, especially when the past seems determined to complicate the future.

A Game of Schemes

What's to happen when a spy and his mark cross paths? Things get wild. When the two turn out to be old friends, all bets are off.

The life of a grey-ops operative for a semi-secret organisation isn't always about guns and ticking bombs. Sometimes it's about something as simple as a snatch-and-grab. Sometimes it's as complex as discovering love where it's least expected.

Sully's been living the life with the Farmingdale Gentleman's Club for five long years. After the Club saved him from a future as a cripple, he owes them. That's not to say that he doesn't love his work, because he does. Sometimes more than others. When an unexpected Game intrudes on Sully's holiday time, he's not happy about it, but he steps up and Plays, unaware that doing so will open him up to old friends, new enemies, and situations beyond his control.

Castor's been living a lie for years, hiding the truth from everyone, but especially his older brother, Ajax. When Sully—the first boy Cas ever had a crush on— suddenly reappears in his life, Cas is more than shaken. Sully seems familiar and like a total stranger, by turns, and while Cas knows people can change over time, the odd personality shifts Sully displays are disturbing. Disturbing enough that Cas knows he can't trust Sully, because Cas has more than one secret. Secrets that will likely get him killed if the wrong people find out.

They live in very different worlds and have very different goals. Their futures seem cast in stone, but stone can crumble under enough pressure, and sometimes a plan is all that's needed. A plan…or maybe just a scheme.