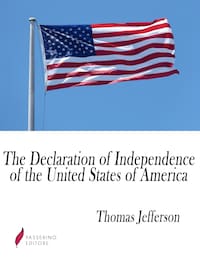 The United States Declaration of Independence

9 pages
TypeE-book
LanguageEnglish
Categories
Non-fictionHistory
Share this book
The United States Declaration of Independence is the statement adopted by the Second Continental Congress meeting at the Pennsylvania State House (now known as Independence Hall) in Philadelphia, Pennsylvania, on July 4, 1776. The Declaration announced that the Thirteen Colonies at war with the Kingdom of Great Britain would regard themselves as thirteen independent sovereign states, no longer under British rule. With the Declaration, these new states took a collective first step toward forming the United States of America. The declaration was signed by representatives from New Hampshire, Massachusetts Bay, Rhode Island, Connecticut, New York, New Jersey, Pennsylvania, Maryland, Delaware, Virginia, North Carolina, South Carolina, and Georgia.

Thomas Jefferson (April 13, 1743 – July 4, 1826) was an American statesman, diplomat, lawyer, architect, and Founding Father who served as the third president of the United States from 1801 to 1809. Previously, he had served as the second vice president of the United States from 1797 to 1801. The principal author of the Declaration of Independence, Jefferson was a proponent of democracy, republicanism, and individual rights, motivating American colonists to break from the Kingdom of Great Britain and form a new nation; he produced formative documents and decisions at both the state and national level.