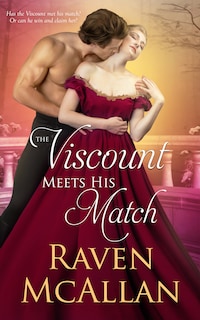 The Viscount Meets his Match

How to persuade the lady your interest is genuine? No easy task. Has the viscount met his match, or can he win and claim a wife?

What do you do when your father has no faith in you?

David, Suddards’ father assumes—wrongly—that David gambles deep and has had an affair with a married lady before she has given her husband an heir. Enraged, his father issues an ultimatum. Marry within three months or lose everything that is not entailed.

David refuses. If that’s what his father thinks of him, he can go to the devil. He will marry when he is ready and not before.

What a shock then, a year later, when the one woman he is interested in shows no interest in him!

It’s up to him to persuade her he’s the right husband for her, and when he does…sparks fly. Can these two strong-willed people ever learn how to compromise and find that in fact they are the perfect match?