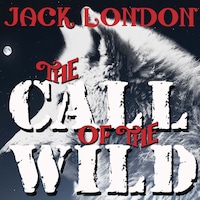 The Call of the Wild

The Call of the Wild is a short adventure novel by Jack London, published in 1903 and set in Yukon, Canada, during the 1890s Klondike Gold Rush, when strong sled dogs were in high demand. The central character of the novel is a dog named Buck. The story opens at a ranch in Santa Clara Valley, California, when Buck is stolen from his home and sold into service as a sled dog in Alaska. He becomes progressively feral in the harsh environment, where he is forced to fight to survive and dominate other dogs. By the end, he sheds the veneer of civilization, and relies on primordial instinct and learned experience to emerge as a leader in the wild.
The Call of the Wild was enormously popular from the moment it was published. H. L. Menken wrote of London's story: ”No other popular writer of his time did any better writing than you will find in The Call of the Wild.” A reviewer for The New York Times wrote of it in 1903: ”If nothing else makes Mr. London's book popular, it ought to be rendered so by the complete way in which it will satisfy the love of dog fights apparently inherent in every man.” The reviewer for The Atlantic Monthly wrote that it was a book: ”untouched by bookishness...The making and the achievement of such a hero [Buck] constitute, not a pretty story at all, but a very powerful one.”
After the success of The Call of the Wild London wrote to Macmillan in 1904 proposing a second book (White Fang) in which he wanted to describe the opposite of Buck: a dog that transforms from wild to tame: ”I'm going to reverse the process...Instead of devolution of decivilization ... I'm going to give the evolution, the civilization of a dog.
Famous works of the author Jack London: ”The Cruise of the Dazzler”, ”A Daughter of the Snows”, ”The Call of the Wild”, ”The Kempton-Wace Letters”, ”The Sea-Wolf”, ”The Game”, ”White Fang”, ”The Iron Heel”, ”Martin Eden”, ”Burning Daylight”, ”A Son of the Sun”, ”The Abysmal Brute”, ”The Valley of the Moon”, ”The Mutiny of the Elsinore”, ”The Star Rover”, ”The Little Lady of the Big House”.