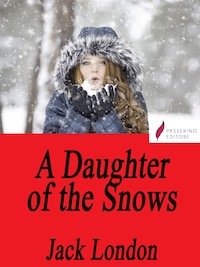 A Daughter of the Snows

269 pages
AuthorJack London
TypeE-book
Categories
NovelsNovels
Share this book
A Daughter of the Snows (1902) is Jack London's first novel. Set in the Yukon, it tells the story of Frona Welse, ”a Stanford graduate and physical Valkyrie” who takes to the trail after upsetting her wealthy father's community by her forthright manner and befriending the town's prostitute. She is also torn between love for two suitors: Gregory St Vincent, a local man who turns out to be cowardly and treacherous; and Vance Corliss, a Yale-trained mining engineer.
The novel is noteworthy for its strong and self-reliant heroine, one of many who would people his fiction. Her name echoes that of his mother, Flora Wellman, though her inspiration has also been said to include London's friend Anna Strunsky.
Modern commentators have criticized the novel for its approval of the main character's view that Anglo-Saxons are racially superior.
The novel was commissioned by publisher S. S. McClure, who provided London a $125 a month stipend to write it.

John Griffith London (born John Griffith Chaney; January 12, 1876 – November 22, 1916) was an American novelist, journalist, and social activist. A pioneer of commercial fiction and American magazines, he was one of the first American authors to become an international celebrity and earn a large fortune from writing. He was also an innovator in the genre that would later become known as science fiction.
His most famous works include The Call of the Wild and White Fang, both set in the Klondike Gold Rush, as well as the short stories ”To Build a Fire”, ”An Odyssey of the North”, and ”Love of Life”. He also wrote about the South Pacific in stories such as ”The Pearls of Parlay”, and ”The Heathen”. London was part of the radical literary group ”The Crowd” in San Francisco and a passionate advocate of unionization, workers' rights, socialism, and eugenics. He wrote several works dealing with these topics, such as his dystopian novel The Iron Heel, his non-fiction exposé The People of the Abyss, War of the Classes, and Before Adam.