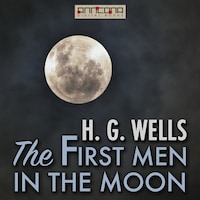 The First Men in the Moon

The First Men in the Moon is a science fiction novel by H. G. Wells, first published in 1901 , who called it one of his ”fantastic stories”.

The novel tells the story of a journey to the moon undertaken by the two protagonists, a businessman narrator, Mr. Bedford, and an eccentric scientist, Mr. Cavor. Bedford and Cavor discover that the moon is inhabited by a sophisticated extra-terrestrial civilization of insect-like creatures they call ”Selenites”.

Britain won the Moon Race! Decades before Neal Armstrong took his ”giant leap for mankind” two intrepid adventurers from Lympne, England, journeyed there using not a rocket, but an antigravity coating.

Mr. Bedford, who narrates the tale, tells of how he fell in with eccentric inventor Mr. Cavor, grew to believe in his researches, helped him build a sphere for traveling in space, and then partnered with him in an expedition to the Moon.

What they found was fantastic! There was not only air and water, but the Moon was honeycombed with caverns and tunnels in which lived an advanced civilization of insect-like beings. While Bedford is frightened by them and bolts home, Cavor stays and is treated with great respect.

So why didn't Armstrong and later astronauts find the evidence of all this? Well, according to broadcasts by Cavor over the newly-discovered radio technology, he told the Selenites too much about mankind, and apparently, they removed the welcome mat!