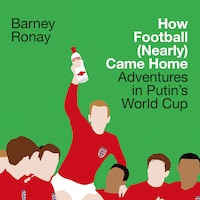 The summer of 2018: England sweltered in the most sustained heatwave for 42 years, the government tore itself apart over deals and no deals, and hundreds of miles away, in a taciturn and strange state, the national football team did the unthinkable in the World Cup: they didn’t screw it up.

The England team that touched down in Russia for the 2018 World Cup was a new-look outfit: there were no real stars, no overblown egos, and no dickheads. Still reeling from the wincing exit to Iceland in the 2016 Euros, expectations were at an all-time low. Qualification had been smooth if not spectacular, and pundits and fans alike were lukewarm about the team’s chances. Just avoiding embarrassment would have counted as some kind of success. As the tournament kicked off, a stunningly stage-managed occasion by Putin and his cronies at FIFA, we all took a deep inhale of breath and waited for the inevitable: technical ineptitude and crap penalties.

How wrong we were. Over the next three weeks, as back home we dissolved in the heat, our football team gave us reason to believe. We squeaked a win against Tunisia, trounced Panama and had a great tactical defeat to Belgium to open up the draw to the final. We all bought waistcoats and eulogised Southgate’s calm, fatherly manner. We all fell in love with ‘Slabhead’, aka Harry Maguire. And we did it all to the tune of ‘It’s Coming Home’.

Barney Ronay was there through the whole tournament, criss–crossing over Russia as he followed the England team, and the rest, on their quest for glory. Here, he captures the sights and sounds, the twists and turns, the bad food and the great football that contributed into making this World Cup one of the greatest of all time.