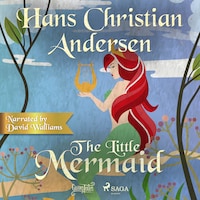 7m
NarratorDavid Walliams
TypeAudiobook
Categories
ChildrenFrom 3+Classics for childrenLove & Friendship
Share this book
David Walliams reads Hans Christian Andersen most famous fairy tale: ”The Little Mermaid”. At the bottom of the ocean lives the sea king, his old mother and his six daughters. They live in a beautiful castle, surrounded by a big garden, of which each daughter has a small corner to take care of. The little mermaid, the youngest and most beautiful of the princesses, likes nothing more than stories about men and in her garden she has a marble statue of a handsome boy, which had sunk down below after a shipwreck. On the day of their fifteenth birthday, each young mermaids is allowed to swim up to the surface and see the world above. Each time one of her sisters returns, the little mermaid listens avidly to theirs stories and waits impatiently for her turn. But when the time finally comes, the little mermaid is faced with a choice that will change her life forever.
David Walliams is a British actors and writer famous his roles in the BBC comedy series ”Little Britain” and ”Come Fly With Me” as well as for appearing on ”Britain’s Got Talent”. Hans Christian Andersen (1805-1875) was a Danish author, poet and artist. Celebrated for his children’s literature, his most cherished fairy tales include ”The Emperor's New Clothes”, ”The Little Mermaid”, ”The Nightingale”, ”The Steadfast Tin Soldier”, ”The Snow Queen”, ”The Ugly Duckling” and ”The Little Match Girl”. His books have been translated into over 160 languages, and today there is no child or adult that isn't familiar with Andersen's whimsical characters. His fairy tales have been adapted to the stage and to the screen countless times, most notably by Disney with the animated films ”The Little Mermaid” from 1989 and the 2013 ”Frozen” franchise, which is loosely based on ”The Snow Queen”. Thanks to Andersen's contribution to children's literature, his birth date, April 2nd, is celebrated as the International Children's Book Day. GivingTales is an app that offers both audio and video content of Hans Christian Andersen’s fairy tales in different languages, narrated by well know actors such as Stephen Fry and Dame Joan Collins. They support charities for children, such as Unicef, Shooting Star Chase, Children’s Hospice Care, and Amade. Saga Egmont is a digital publisher, specialising in ebooks and audiobooks. They are a part of the Egmont Foundation, which support vulnerable children and young people and has been combating poverty since 1920.