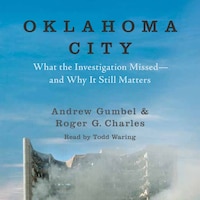 In the early morning of April 19, 1995, Timothy McVeigh drove into downtown Oklahoma City in a rented Ryder truck containing a deadly fertilizer bomb that he and his army buddy Terry Nichols had made the previous day. He parked in a handicapped-parking zone, hopped out of the truck, and walked away into a series of alleys and streets. Shortly after 9:00 A.M., the bomb obliterated one-third of the Alfred P. Murrah Federal Building, killing 168 people, including 19 infants and toddlers. McVeigh claimed he'd worked only with Nichols, and at least officially, the government believed him. But McVeigh's was just one version of events. And much of it was wrong.

In Oklahoma City, veteran investigative journalists Andrew Gumbel and Roger G. Charles puncture the myth about what happened on that day—one that has persisted in the minds of the American public for nearly two decades. Working with unprecedented access to government documents, a voluminous correspondence with Terry Nichols, and more than 150 interviews with those immediately involved, Gumbel and Charles demonstrate how much was missed beyond the guilt of the two principal defendants: in particular, the dysfunction within the country's law enforcement agencies, which squandered opportunities to penetrate the radical right and prevent the bombing, and the unanswered question of who inspired the plot and who else might have been involved.

To this day, the FBI heralds the Oklahoma City investigation as one of its great triumphs. In reality, though, its handling of the bombing foreshadowed many of the problems that made the country vulnerable to attack again on 9/11. Law enforcement agencies could not see past their own rivalries and underestimated the seriousness of the deadly rhetoric coming from the radical far right. In Oklahoma City, Gumbel and Charles give the fullest, most honest account to date of both the plot and the investigation, drawing a vivid portrait of the unfailingly compelling—driven, eccentric, fractious, funny, and wildly paranoid—characters involved.