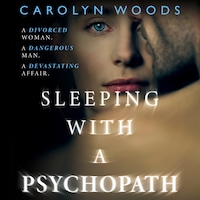 Sleeping with a Psychopath

A Divorced Woman. A Dangerous Man. A Devastating Affair.

‘You’re right. It is totally extraordinary. My life is like a film; you couldn’t make it up … But there’s something I have to tell you,’ he confided, as he leaned across the table towards me. ‘I’m not normal.’

Carolyn Woods was living happily in a quiet Cotswolds village when an attractive stranger abruptly arrived in her life.

Introducing himself as Mark Conway, he exuded confidence and to her surprise Carolyn quickly became captivated by this mysterious man. A rich Swiss banker (who later confessed to being a spy), he offered Carolyn companionship and introduced her to an exciting, glamorous world.

In fact, some things were so astonishing she began to question her new lover. Was all as it seemed?

The truth was even harder to believe. For a start, his real name was Mark Acklom, he was wanted by Interpol, and he was rich but for one reason only…

A true-crime story that reads like a thriller, Sleeping with a Psychopath is a blow-by-blow account of the power of manipulation and a testament to the human will to survive.