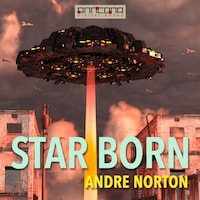 When Raf Kurbi's Terran spaceship burst into unexplored skies of the far planet Astra and was immediately made welcome by the natives of a once-mighty metropolis, Kurbi was unaware of three vital things:

One was that Astra already harbored an Earth colony—descended from refugees from the world of the previous century.

Two was that these men and women were facing the greatest danger of their existence from a new outburst of the inhuman fiends who had once tyrannized Astra.

Three was that the natives who were buying Kurbi's science know-how were those very fiends—and their intentions were implacably deadly for all humans, whether Earth born or STAR BORN.

Andre Norton's ”Star Born” pictures a human colony in another galaxy, driven away from Earth generations ago by a repressive government. Considered outlaws, the colonists are in permanent hiding.

They have developed friendship and cooperation with a local race of ”mermen” who are equally at home on land or sea. But that race only took to the sea to escape a malevolent power that hunted them and killed them violently for sport - Those Others.

With a global decline in the population and reach of Those Others, contacts are few and the humans have no direct knowlege of them.

So it is a major surprise when Dalgard, a human scout on his coming-of-age expedition, along with his ”knife-brother” Sssuri of the mermen, run into a party of Those Others who are bent on reclaiming hideous weaponries left behind in one of their abandoned cities... and find that they are being aided by new arrivals from Earth!

Star Born was first published in 1957 and is the sequel to The Stars Are Ours! and continues that adventure three generations on.