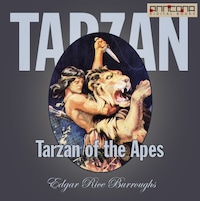 Tarzan of the Apes

9h 10m
NarratorMark F. Smith
TypeAudiobook
SeriesThe Tarzan series
Categories
NovelsNovels
Share this book
Tarzan of the Apes is a novel written by Edgar Rice Burroughs, the first in a series of books about the title character Tarzan. It was first published in the pulp magazine All-Story Magazine in October, 1912, the first book edition was published in 1914. The character was so popular that Burroughs continued the series into the 1940s with two dozen sequels.
Tarzan of the Apes has been the basis of several movies. The first two were the silent films Tarzan of the Apes (1918) and The Romance of Tarzan (1918), both starring Elmo Lincoln as Tarzan, based on the first and second parts of the novel, respectively. The next and most famous adaptation was Tarzan the Ape Man (1932), starring Johnny Weissmuller, who went on to star in eleven other Tarzan films. Clayton was substituted by Harry Holt. It was remade twice, as Tarzan, the Ape Man (1959), featuring Denny Miller, and Tarzan, the Ape Man (1981), with Miles O'Keeffe as Tarzan and Bo Derek as Jane. Three more movie adaptations have been made to date: Greystoke: The Legend of Tarzan, Lord of the Apes (1984), a film starring Christopher Lambert that is more faithful to the book; Tarzan of the Apes (1999), a direct to video animated film; and Tarzan (1999), a Disney animated film with Tony Goldwyn as the voice of Tarzan.
Tarzan is a fictional character, an archetypal feral child raised in the African jungles by the Mangani ”great apes”; he later experiences civilization only to largely reject it and return to the wild as a heroic adventurer. Created by Edgar Rice Burroughs, Tarzan first appeared in the novel Tarzan of the Apes (magazine publication 1912, book publication 1914), and then in twenty-five sequels, three authorized books by other authors, and innumerable works in other media, authorized and not.
Tarzan is the son of a British lord and lady who were marooned on the Atlantic coast of Africa by mutineers. When Tarzan was only an infant, his mother died of natural causes and his father was killed by Kerchak, leader of the ape tribe by whom Tarzan was adopted. Tarzan is his ape name; his real English name is John Clayton, Earl Greystoke.
Tarzan has been called one of the best-known literary characters in the world. In addition to more than two dozen books by Burroughs and a handful more by authors with the blessing of Burroughs' estate, the character has appeared in films, radio, television, comic strips, and comic books.
Edgar Rice Burroughs (1875-1950) was an American author, best known for his creation of the jungle hero Tarzan and the heroic Mars adventurer John Carter, although he produced works in many genres.