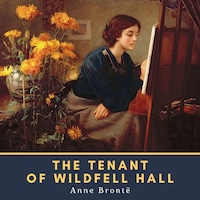 The Tenant of Wildfell Hall

The Tenant of Wildfell Hall is the second and final novel by the English author Anne Brontë. It was first published in 1848 under the pseudonym Acton Bell. Probably the most shocking of the Brontë's novels, it had an instant and phenomenal success, but after Anne's death her sister Charlotte prevented its re-publication in England until 1854.

The novel is framed as a series of letters from Gilbert Markham to his friend about the events connected with his meeting a mysterious young widow, calling herself Helen Graham, who arrives at Wildfell Hall, an Elizabethan mansion which has been empty for many years, with her young son and a servant. Contrary to the early 19th century norms, Helen pursues an artist's career and makes an income by selling her pictures. Mrs Graham's strict seclusion soon gives rise to gossip in the neighbouring village and she becomes a social outcast. Refusing to believe anything scandalous about her, Gilbert befriends Mrs Graham and discovers her past. In the diary she gives Gilbert, Helen chronicles her husband's physical and moral decline through alcohol and debauchery in the dissipated aristocratic society. Ultimately Helen flees with her son, whom she desperately wishes to save from his father's influence. The depiction of marital strife and women's professional identification has also a strong moral message mitigated by Anne Brontë's belief in universal salvation.

Most critics now consider The Tenant of Wildfell Hall to be one of the first feminist novels. May Sinclair, in 1913, said that ”the slamming of [Helen's] bedroom door against her husband reverberated throughout Victorian England”. In leaving her husband and taking away their child, Helen violates not only social conventions but also the early 19th century English law.