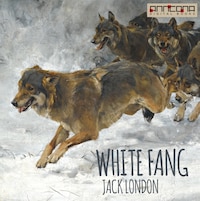 7h 38m
NarratorMark F. Smith
TypeAudiobook
Categories
NovelsNovels
Share this book
White Fang is the titular character and a novel by Jack London. First serialized in Outing magazine, it was published in 1906. The story takes place in Yukon Territory, Canada, during the Klondike Gold Rush at the end of the 19th-century, and details a wild wolfdog's journey to domestication. White Fang is a companion novel (and a thematic mirror) to London's best-known work, The Call of the Wild, which is about a kidnapped, domesticated dog embracing his wild ancestry to survive and thrive in the wild.
Much of the novel is written from the view-point of his canine character, enabling London to explore how animals view their world and how they view humans. White Fang examines the violent world of wild animals and the equally violent world of humans. The book also explores complex themes including morality and redemption.
White Fang has been adapted for the screen numerous times, including a 1991 film starring Ethan Hawke.
John Griffith ”Jack” London (1876-1916) was an American author, journalist, and social activist. He was a pioneer in the then-burgeoning world of commercial magazine fiction and was one of the first fiction writers to obtain worldwide celebrity and a large fortune from his fiction alone. He is best remembered as the author of The Call of the Wild and White Fang, both set in the Klondike Gold Rush, as well as the short stories ”To Build a Fire”, ”An Odyssey of the North”, and ”Love of Life”. He also wrote of the South Pacific in such stories as ”The Pearls of Parlay” and ”The Heathen”, and of the San Francisco Bay area in The Sea Wolf.
London was a passionate advocate of unionization, socialism, and the rights of workers and wrote several powerful works dealing with these topics such as his dystopian novel The Iron Heel, his non-fiction exposé The People of the Abyss, and The War of the Classes.
London's most famous novels are The Call of the Wild, White Fang, The Sea-Wolf, The Iron Heel, and Martin Eden.