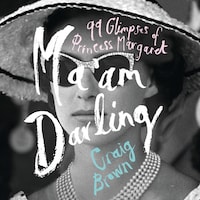 The funny and tragic, bestselling biography of The Queen’s sister, Princess Margaret, perfect for fans of Netflix’s The Crown.

She made John Lennon blush and Marlon Brando clam up. She cold-shouldered Princess Diana and humiliated Elizabeth Taylor.

Andy Warhol photographed her. Jack Nicholson offered her cocaine. Gore Vidal revered her. John Fowles hoped to keep her as his sex-slave. Dudley Moore propositioned her. Francis Bacon heckled her. Peter Sellers was in love with her.

For Pablo Picasso, she was the object of sexual fantasy. “If they knew what I had done in my dreams with your royal ladies” he confided to a friend, “they would take me to the Tower of London and chop off my head!”

Princess Margaret aroused passion and indignation in equal measures. To her friends, she was witty and regal. To her enemies, she was rude and demanding.

In her 1950’s heyday, she was seen as one of the most glamorous and desirable women in the world. By the time of her death, she had come to personify disappointment. One friend said he had never known an unhappier woman.

The tale of Princess Margaret is pantomime as tragedy, and tragedy as pantomime. It is Cinderella in reverse: hope dashed, happiness mislaid, life mishandled.

‘Brown has been our best parodist and satirist for decades now … Ma’am Darling is, as you would expect, very funny; also, full of quirky facts and genial footnotes. Brown has managed to ingest huge numbers of royal books and documents without losing either his judgment or his sanity. He adores the spectacle of human vanity’ Julian Barnes, Guardian