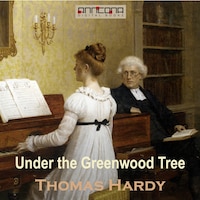 Under the Greenwood Tree

Under the Greenwood Tree, subtitled The Mellstock Quire, A Rural Painting of the Dutch School, is a novel by Thomas Hardy, published anonymously in 1872. It was Hardy's second published novel, the last to be printed without his name, and the first of his great series of Wessex novels. Whilst Hardy originally thought of simply calling it The Mellstock Quire, he settled on a title taken from a song in Shakespeare's As You Like It (Act II, Scene V).

The Quire is the group of musicians who accompany the hymns at the local church and we follow the fortunes of one member, Dick Dewy, who falls in love with the new schoolmistress, Fancy Day.

Another element of the book is the battle between the traditional musicians of the Quire and the local vicar, Parson Maybold, who installs a church organ. This battle illustrates the developing technology being introduced in the Victorian era and its threat to traditional country ways.

The novel is often seen as Thomas Hardy's most gentle and pastoral novel. Sometimes grouped with Hardy's lesser novels, Under the Greenwood Tree is also occasionally recognised by critics as an important precursor to his major works.

In his 1872 review of the novel for the Saturday Review, the critic Horace Moule, one of Hardy's mentors and friends, called it a ”prose idyll”; that judgement has stuck. Hardy's amiable, mildly ironic portrait of rural town life in the middle of the nineteenth century is perhaps the strongest aspect of the work. The Wessex rustics who play critical but generally secondary roles in Hardy's later novels, like The Return of the Native and The Mayor of Casterbridge, claim the centre stage in Under the Greenwood Tree.