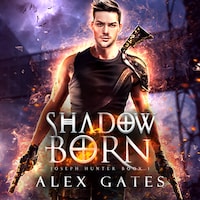 Once an international monster hunter, Joseph is now nothing more than a depressed drunk who occasionally showers

He retired from the magical world five years ago to protect his daughter from the evil that hunted him and killed his wife. Who killed her? Not even he could piece that mystery together.

But her killers haven’t finished torturing him. On the anniversary of his wife’s death, a Sorceress had her vampire goons kidnap his daughter.

Five years of retirement has made Joseph physically out of shape, magically rusty, emotionally grumpy, and entirely dependent on alcohol... but he’s back in the game and out for blood. He’ll stop at nothing to track down and save his daughter, and kill anyone or anything involved with her disappearance.

Will he fail, once again, to protect someone he loves, or can he overcome his shortcomings to intervene before it’s too late?